We dream of Filipinos who passionately love their country and whose values and competencies enable them to realize their full potential and contribute meaningfully to building the nation.
As a learner-centered public institution, the Department of Education continuously improves itself to better serve its stakeholders.

To protect and promote the right of every Filipino to quality, equitable, culture-based, and complete basic education where:
- Students learn in a child-friendly, gender-sensitive, safe, and motivating environment
- Teachers facilitate learning and constantly nurture every learner
- Administrators and staff, as stewards of the institution, ensure an enabling and supportive environment for effective learning to happen
- Family, community, and other stakeholders are actively engaged and share responsibility for developing life-long learners

The existence of multimillion companies in Calumpang such as DOLE Philippines, Sta Monica Canning Corporation and other fishing and canning firms brought about an exodus of people to the place. The rapid increase in population magnifies the number of high school students, which made the Â former Assistant Schools Division Superintendent Leonor F. PeÃ±alosa and the late Mayor Antonio C. Acharon realize the need to put up a public secondary school in the area, resulting to the establishment of GENERAL SANTOS CITY HIGH SCHOOL which caters to the educational need of the new and flourishing community.

This institution started to operate in July 1980 with the passage of a resolution by the Sangguniang Panlungsod and subsequently by the virtue of Republic Act 6642. Mr. Jacobino C. Java was then the first administrator to 117 first year students and 6 teachers.

In five years, the school's population continued to increase under the administration of Mr. Ruben Aquino and Mrs. Vivenia CaÃ±a. In 1986, a dynamic leader evolved, Â in the person of Mrs. Cristina N. Mari who made significant academic and infrastructure developments, giving the school a distinguished reputation as a DIVISION LEADER SCHOOL. HerÂ retirement in the year 2000 paved back the way for Mrs. Estrella C. Lariosa (then the Assistant Schools Division Superintendent) as the Officer In-charge of this school.

In the succeeding year, the headship of General Santos City High School was formally turned over to Mrs. Veronica Punsalan. Since then, remarkable curricular changes took place. The school started to offer special training Â in sports and in arts. In the school year 2003-2004 it Â was awarded a 3.75 million peso- multipurpose gymnasium donated by the Taiwanese philanthropists in partnership with the Local Government under the leadership of the Hon. City Mayor Pedro B. Acharon Jr.

In the shool year 2005-2006, Mrs. Veronica Punsalan went on vacation leave, so, Mr. Isagani S. Dela Cruz, Master Teacher I in Mathematics, served as the Officer in-Charge until his designation as the Assistant Schools Division Superintendent in Sarangani Province in the same year. Mrs. Gilda A. Orendain, Head Teacher II, continued the task from September 16,2005 to April 15, 2006. During her time, 4 teachers were sent as scholars to Manila and Bukidnon.

A new Officer in-Charge was ushered to the administrator's seat in the school year 2006-2007 as Mr. Angelito C. Llanos was chosen to perpetuate a principal's tasks. His administration streamlined significant educational advancement in the field of Information and Communications Technology as the General Santos City High School became the REGIONAL ICT CENTER with Project ALERT as the flagship banner. Shortly after was the recognition and the integration of ICT program. The ICT facilities include the digitally-equipped Audio-Visual room (the first in the history of all public secondary schools in Region XII), Â and the Cyber-Ed center which were constructed through the collaborative efforts of the PTCA and the school administration. Aside from those, theÂ School Main Marker and the Covered Pathways were always built.

Since its birth in 1980, General Santos City High School, indeed, has been living up to its worth as the PREMIER public school in the city. 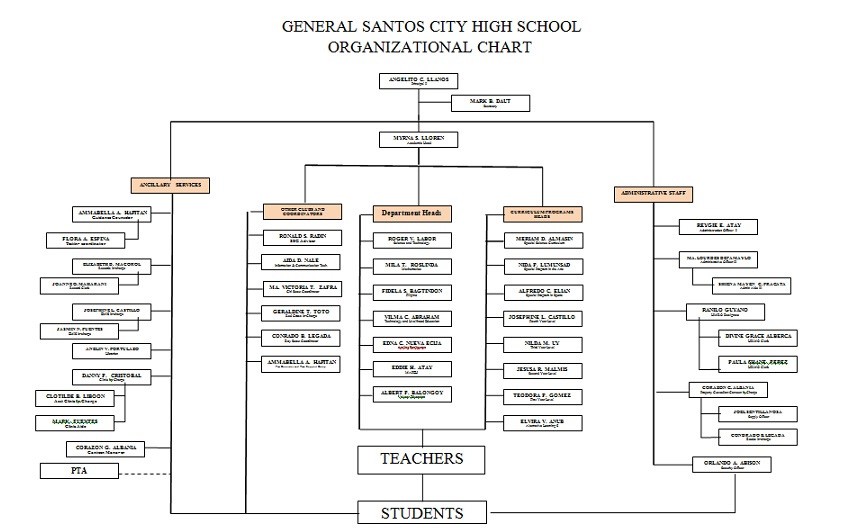